Last Saturday, I  happened to go for  trekking to Savandurga, one of the weekend getaways at a short distance from Bangalore.  Savandurga is one of the largest monolithic rocks in Asia and is popular with trekkers and rock-climbers. Quite a few locals also visit the Sri Lakshmi Narasimha Swamy Temple and Savandi Veerabhadreshwara Swamy Temple located at the foothills of the monolithic rock. My purpose of visit was two-fold, one to do some trekking which I have not being doing for ages and another to see the remains of the fort which shielded the place from the British during the era of Hyder Ali and Tippu Sultan, the father-son duo who were the rulers of princely state of Mysore.  The fort had been built in 1543 by Samanta Ray after which it stayed with Kempe Gowda till 1728. It was then captured by the Raja of Mysore and passed on to Hyder Ali and Tippu Sultan. The fort was thought to be very sturdy and most difficult to capture among all of Tippu's forts .However during the Third Anglo Mysore war, the British troops under the command of Lord Cornwallis captured the fort on December 21st, 1791 subsequently leading to the downfall of Tippu Sultan who was ultimately killed in the Fourth Anglo Mysore War with an opposition having the combined forces of the British along with their  ally, the Nizam of Hyderabad.

Coming to the actual details of my trip, we started off on a beautiful Saturday morning from Corporation Circle and proceeded towards Savandurga passing through the beautiful Karnataka countryside and small villages and towns in between arriving at our destination in about 2 hours... Savandurga consits of two mountains - Karigudda (black hill) and Biligudda (white hill). A photo of the Karigudda (black hill) on which we were to start our trekking. 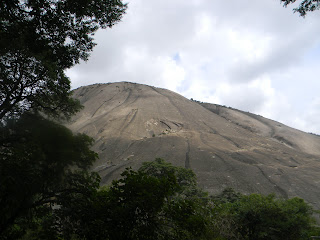 After a quick pre-trek talk, we started to trek on the Karigudda... The weather was just perfect for trekking.. Though we were surrounded by a sheet of black clouds, we were lucky that it did not rain and the climate was just cool and perfect throughout our trekking. Could not have  asked for more.. My legs which had not be trekking for ages initially resisted to trekking but soon gave in as we started walking up the mountain. 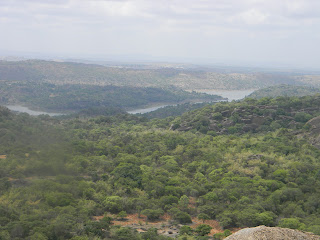 As we trekked up higher, we came across several tiers  of  forts  each built at a good vertical distance from the other to safeguard the place from the British.. (as described above - they ultimately came to be captured by the British in the Third Anglo Mysore war).

Shown below is the pic of the one such layer... Seems to have a resemblence with Vagathor fort, Goa of the 'Dil Chatha Hain' fame. While Vagathor fort faces the beaches, Savandurga fort faces the plains , the arkavathi river and the small villages around.. 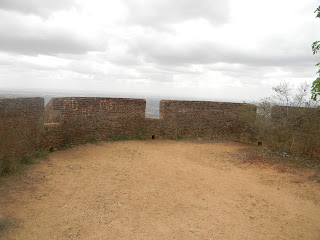 So after posing and taking much snaps, we trekked further up until we reach the next tier of the fort. 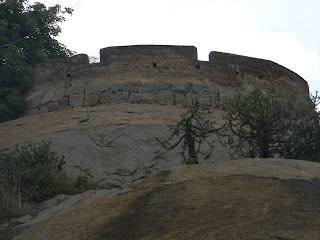 We trekked further up passing through  vegetation and huge rocks and finally reached the top..  A Nandi temple lay on a perfect place on the summit and our prayers were answered - a great trekking experience with the perfect climate and reaching the summit within a span of 1.5 to 2 hours:) What else could you ask for! 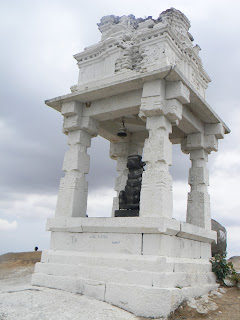 We stayed there for a while having lunch and taking in the beautiful scenary around. The BiliGudda hill was visible just across.Photos of the BiliGudda taken from the KariGudda shown below. 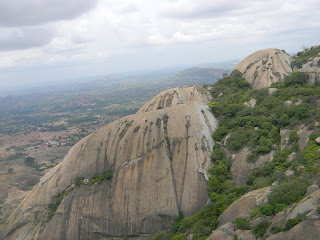 We started descending down after a while and the return trip also gave some beautiful views of the landscape below. 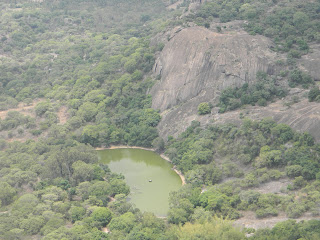 Descending was a lot easier than climbing..  Overall, its quite an easy trek which can be covered in a total of 3 hours (1.5 hours up and down)..  We spent an hour at top for lunch and taking in the fresh mountain air making it a total of 4 hours. Travel time from the city center (majestic) would be 2 hours one way.One can very easily cover the trip in 8 hours..So, what are you waiting for? Pack your bags for the weekend and head out to get a dose of fresh mountain air , greenery and history lessons!!
Posted by Indian_Explorer at 12:58 PM

Thank you for your comment. Do come back again soon!